St. Stephen is first mentioned in the Scriptures in the Book of the Acts of the Apostles, chapters six and seven. He is listed among seven men who were chosen to serve the early Christian community by taking care of the temporal and charitable affairs. This served to free up the Apostles so that they would not "neglect the preaching of God's word in order to handle finances."

Stephen is described as a man of faith and the Holy Spirit. He and his six companions were prayed over by the Apostles and ordained by the imposition of hands. The title deacon, meaning "to minister," came to be linked with their function.

Gradually the role of deacon moved into the spiritual realm. Stephen, in particular, spoke with great vigor about Jesus Christ, and in doing so drew upon himself the wrath of the Jewish priestly class. He was falsely accused of blasphemy, and though Stephen presented and defended himself ably, they invoked the Jewish death penalty of stoning him.

Stephen, full of "grace and fortitude" to the very end, met the great test without flinching, praying to the Lord to receive his spirit and not to lay this sin against the people. He became the first martyr in the year 35 A.D.

Stephen is pictured carrying three stones, symbolic of his martyrdom by being stoned to death. He is referred to as the patron of stonemasons.

The symbol to the right, the red banner and palms, represents martyrdom.

The symbol to the left, a harp, conveys the notion of praise. While not directly referring to Stephen, the symbol was chosen because of its location in the stairway to our choir loft. The choir greatly enhances our worship and praise of God. 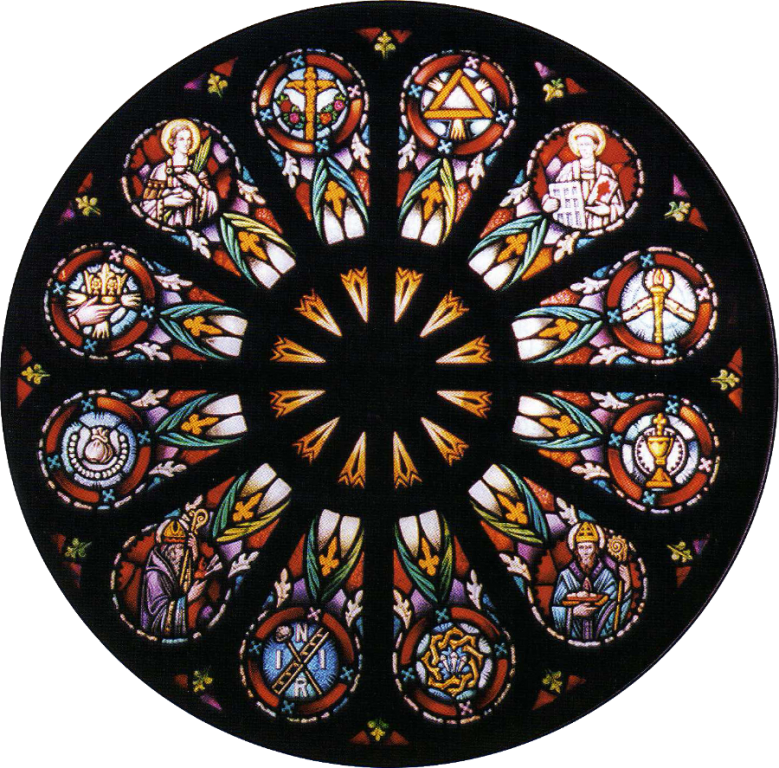 Our beautiful Rose Window was dedicated on December 13, 1959. Many different figures and symbols are portrayed in the twelve panels.

Starting at the upper right (one o'clock position) and going clockwise:

A Triangle - which represents the Holy Trinity, Three Persons in One God - Father, Son, and Holy Spirit.

St. Lawrence - like St. Stephen, St. Lawrence was a deacon and a martyr. He worked for the poor and prayed for the conversion of Rome. In 258 he was martyred by roasting on a grid iron and tradition says he was buried at the same place as Stephen.

A Torch - which is a symbol of zeal for the Word of God, of enlightenment, and of fervor.

A Chalice - the cup-shaped vessel used at Mass in which the wine is consecrated. It serves as a symbol of worship or faith or especially the Eucharist. Another association is the cup of suffering of Jesus in the Garden of Gethsemane.

St. Nicholas - born in Lycia, Asia Minor, he eventually became the bishop there in the fourth century. He is distinguished for his austerity, childlike innocence, charity, being especially concerned for the welfare of the young. Nicholas also took strong measures against paganism and was persecuted for his stand against heresy. He is pictured with three loaves of bread and is known as the patron of bakers. He is also venerated as the patron of children and the foundation of our Santa Claus.

The Crown of Thorns and Blunt Roman Spikes - Instruments of the passion and death of Jesus: the soldiers made a crown of thorny branches, put it on his head, and mocked Him as being the King of the Jews. The spikes/nails secured Jesus by His hands and feet to the cross.

Ladder, Sponge, INRI - The ladder refers to taking Jesus down from the Cross. The sponge was soaked in cheap wine, put on a branch, and held up to the lips of Jesus as He hung on the Cross. It is composed of the first letters of the Latin words meaning Jesus of Nazareth, King of the Jews."

St. Augustine - born in 354 in Africa. In spite of the piety of his mother, St. Monica, as a youth he was a great sinner as described in his autobiography - "The Confessions." At age 33, he finally converted and received Baptism. At age 41, he became Bishop of Hippo. From then till his death in 430 he wrote voluminous works that have been the admiration of the ages and earned him the title of one of the greatest Doctors of the Western Church. Both he and St. Nicholas are associated in paintings with St. Stephen. A common symbol in art for St. Augustine is a flaming heart pierced with arrows.

Purse - refers to the bag containing the thirty pieces of silver that was given to Judas for handing over Jesus. It is known as a symbol of betrayal.

Hands of God Holding a Crown - refers to the ultimate triumph of good over evil. Likewise Jesus' crown of thorns merited him the crown as Christ our King.

Crucifix and Roses - A cross or crucifix is a symbol for Christ, Christianity, Redemption, Atonement. It is the building block of our faith. A rose is a sign of love, and a red rose is a sign of martyrdom. In this instance it portrays the scriptural quote - "Greater love than this no one has than to lay down one's life for one's friends" John 15:13 - Martyrdom for the beloved. Note also that the color red predominates throughout the window as well as the design of palm branches. Both refer to love, sacrifice, martyrdom of our patron, St. Stephen, and to the challenging times of church history in opposing paganism and heresy and the periods of persecution the Church underwent. Hopefully it will inspire us to the true meaning of being a parish family and a faith community.